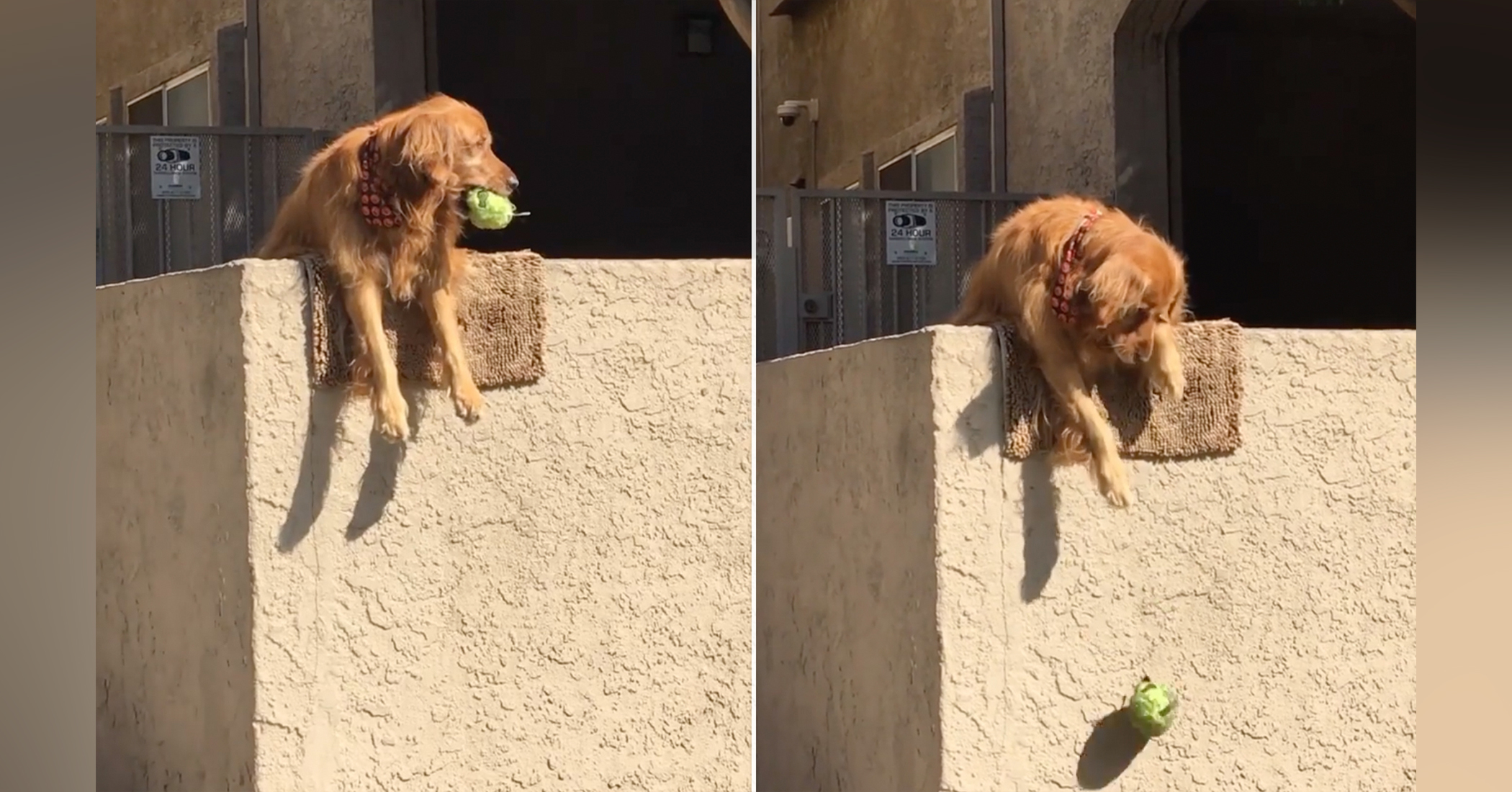 Golden Retriever clings to the wall and drops balls, asking people to play – it works every time

Riley the golden retriever does the same trick every day. For years. He clings to his garden wall and drops a toy on the street, hoping someone will play with it – and it works every time.

The 9-year-old rescue pup, who lives in California with his owner, Wendy, loves meeting people, especially children. Wendy told The Epoch Times that Riley can also sense when someone isn’t feeling well. Often people coming home from work stop to pet it, and if they’ve had a bad day, they’ll notice how much it means to them to be able to spend a few moments with the special golden retriever.

“He’s like a therapy dog ​​hanging on the wall for people to come. He knows when a person is not feeling well. He just knows,” Wendy said.

Wendy found her beloved dog at a small rescue center in Big Bear when he was 10 and a half weeks old and brought him home. It quickly became apparent that her pup was quite the little character.

“He’s not like a normal golden retriever,” she said. “He didn’t have all that energy as a puppy; didn’t bark much, he just wanted to do his thing, that was all. He doesn’t like swimming, which is kind of an atypical golden thing. He’s his own little person, he just wants to relax. But he loves people, especially children.

Wendy had another golden retriever that liked to hang on the backyard wall, and Riley decided to try it out for himself. At one year old, he underwent surgery for elbow dysplasia, and he was bored to continue his favorite pastime: hanging on the wall. So Wendy put down a crate of apples that he could stand on, allowing him to put his front legs just above the top of the wall.

And that’s what made him notice.

One day, Riley was doing her now famous trick when a film crew showed up. They quickly spotted the cute dog and immediately fell in love with him. It took the film crew causing such a buzz for Wendy to come out into the street and realize how sweet and comical her dog looked, and what he was doing, dropping the ball and asking people to pick it up.

“The whole crew and everyone would come by and take selfies with him,” Wendy recalled.

“I was always on the other side, so I never saw what the others were seeing on the street. I knew he always had a bullet in his mouth and I knew people always stopped to play with him.

After someone took a video of Riley and posted it to his Twitter account, he suddenly became an online superstar.

Wendy has created an Instagram page for her beloved pup, @itsrileysworld, where she shares the pup’s misdeeds with the world.

“My Instagram blew up,” she said. “People even started coming just to visit him. People fly to California and the first thing they want to do is go meet Riley.

All the attention makes Riley extremely happy, Wendy said, because he’s always so excited to meet people. Unfortunately, some people get the wrong stick and think it’s stuck.

“I could hear people outside,” she says, “and they were like, ‘Oh my God, that poor dog stuck to the wall. He’s stuck on the wall and he needs help,” and I had to come out to tell them he was standing on a box of apples.

“I also get a lot of comments like, ‘This poor dog is so lonely. He’s trying to get other people’s attention because his owners aren’t paying attention to him.

(Courtesy of This is Riley’s World)

Nothing could be further from the truth. Riley is everything to Wendy. And everyone gravitates to the happy dog ​​hanging on the wall.

“Riley follows me everywhere. He goes everywhere with me,” she said. “He’s very sad if I can’t take him somewhere.

“He makes so many people happy and that makes him happy. He loves going up there. He can see the whole street while he’s up there; can see everyone.

“When he sees people walking down the street from afar, he gets all excited, his tail wags and he starts barking. It’s such a happy thing for him. He created this situation on his own.

Some might call him a one-trick pony, but all agree that Riley is just plain adorable.

Share your stories with us at [email protected], and keep getting your daily dose of inspiration by signing up for the Inspired newsletter at: https://www.theepochtimes.com/newsletter