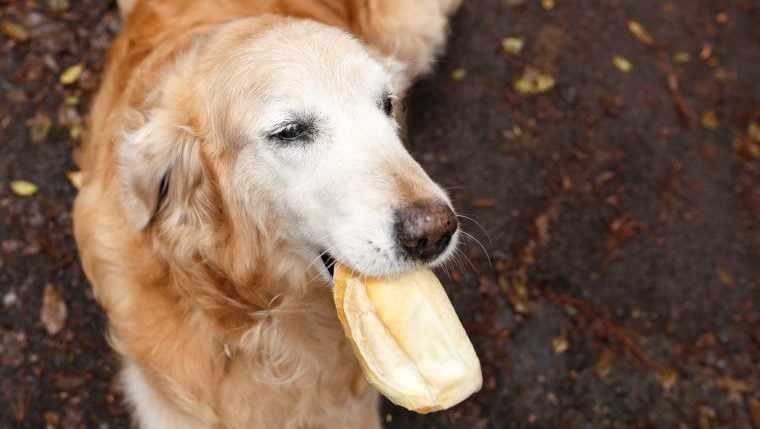 A Tennessee family has a lot to be thankful for this year. That’s because they can celebrate the holidays with their Golden Retriever, Pippa, who nearly didn’t make it after being poisoned with yeast from a common Turkey Day dish last year.

Last Thanksgiving, Becky Collins of Knoxville was baking her holiday feast, which included bread dough for buns. She shaped the dough and laid it out in what she thought was a safe place, covered with a towel. But when she went to remove the towel and bake the buns several hours later, she discovered that half of the dough balls were missing. Her 2-year-old dog, Pippa, was the obvious culprit.

“Sneakily, the dog had obtained the rolls without disturbing the towel. I don’t know how she did it,” Collins told Today.

But Collins didn’t give it much thought – that is, until after dinner, when the mom dog noticed her pup was unusually lethargic.

“That’s when I started thinking, ‘Oh, the yeast is rising. I’m going to call someone and see what they recommend,’ she told Today.

She landed on the Pet Poison helpline, and an expert there recommended that she take Pippa to an emergency animal hospital immediately. Pippa was hospitalized overnight at the Animal Emergency & Specialty Center in Knoxville, where the pup was fed ice cubes to keep the dough from rising in her warm stomach.

An ounce of prevention

Pippa was lucky. She passed the paste naturally and did not need surgery. But now Collins feels compelled to warn other pet parents about the dangers of Thanksgiving foods, some of which could be hazardous to their health.

Bread dough, in particular, is a double whammy due to the potential for yeast poisoning. It can cause fatal twisting of the stomach as well as alcohol poisoning.

“What would happen sitting on your kitchen counter would eventually happen in your pet’s stomach,” Pet Poison Helpline-certified veterinary toxicologist Dr. Renee Schmid told Today. “This dough rises and causes the stomach to stretch, or distension. And then this fermenting yeast produces ethanol, an alcohol. These animals can therefore develop alcohol poisoning.

If you suspect your dog has ingested yeast, consult a veterinarian immediately. Other dangerous foods to watch out for include turkey bones, turkey fat, chocolate, grapes, raisins, onions, and garlic.

And if you, like Collins, are baking bread as part of your Thanksgiving meal this year, be sure to let it rise away from your dog’s reach, such as above the fridge. No one wants to spend the holidays in the emergency room!