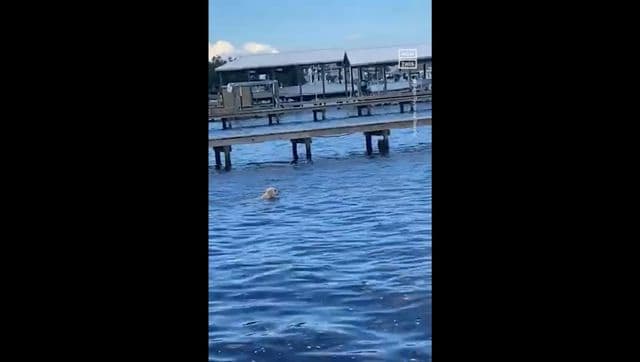 Golden retriever surprised after encountering herd of manatees while swimming

Golden retrievers are funny, adorable and full of personality and at the same time very curious about everything. People love spending time with them. There are also several videos and photos that grab the attention of the internet and go viral in no time. From playing with their humans to engaging in adventurous activities, Golden Retrievers are experts in everything and love to stay energetic. In one such video, a curious golden retriever was swimming through the waters recently, but to his surprise he was surprised by a group of manatees sleeping below the surface of the water.

Notably, the incident comes from Alabama where the dog fearlessly entered the waters of Orange Beach. As he gently paddled down the beach, a group of 8-10 underwater swimming manatees were alerted by the movement which then caused huge splashes. Not only the poor dog, but the manatees were also shocked by the sudden event after which he swam to shore.

The dog was identified as Flip who came with his owner to the beach to enjoy the swim. The dog’s worried owner, Sage Taylor, can also be heard in the video as she screams and tries to remind her of Flip. A video of the entire episode was shared by a page named Now This News on its Twitter and Instagram handles and has already gone viral.

A golden retriever named Flip got the scare of his life when he woke up a herd of sleeping manatees in the waters off Orange Beach, AL.

Flip’s human, Sage Taylor, said there were about 8-10 manatees in the group. Taylor says Flip was “shaken up” but ultimately unharmed. pic.twitter.com/INFsmETqqk

Since it was shared, the video has caught people’s attention, and many have taken to the comments section to share their views. One wrote: “I don’t care if it’s sharks. I would dive into the rescue without batting an eyelid,” while another person commented, “Keep pets away from wildlife. How difficult.

On the other hand, the owner, speaking to Fox 10 News also confirmed that the dog was shocked by the incident but managed to escape unscathed. “She wanted to have a little more action, so she went in the water and scared them all,” she added.