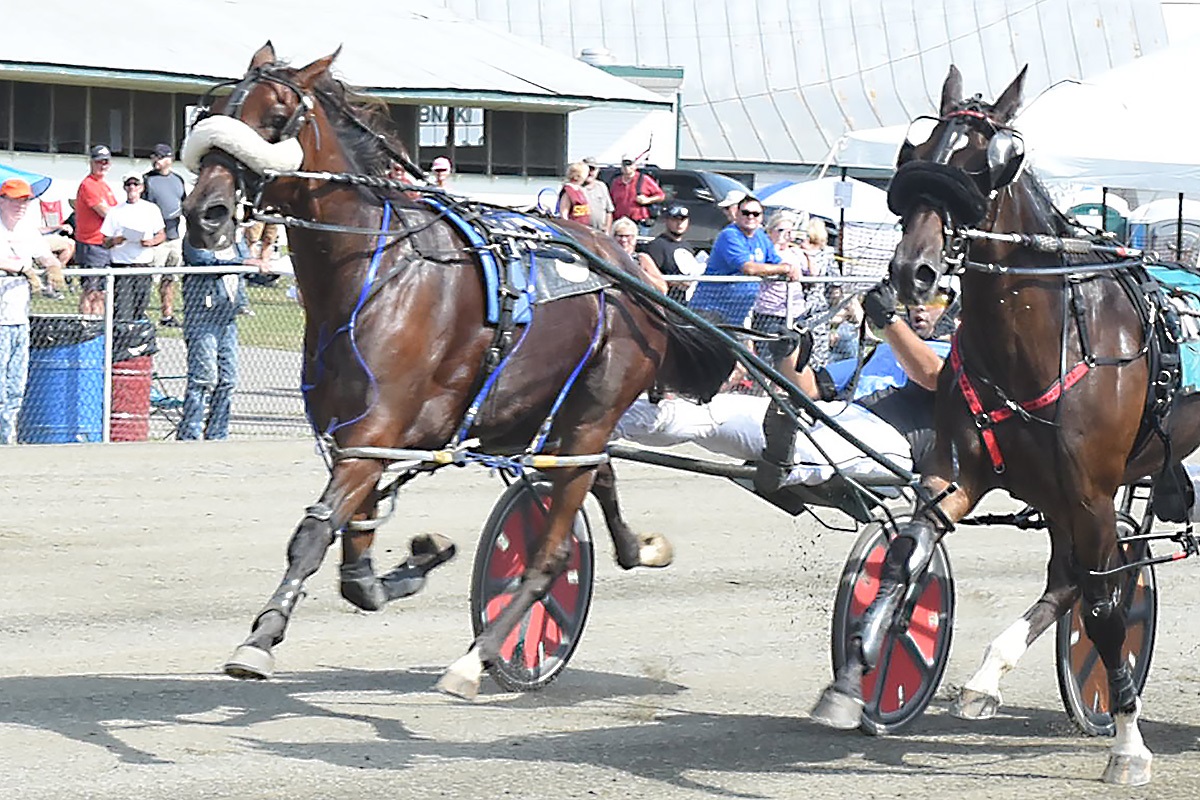 WINDSOR, ME – Luke McGook (rock ‘n’ roll world), the freshman harness racer from Maine with the funny name earned redemption Monday (Aug. 29) at the Windsor Fair, reaffirming himself as the top dog in the division with a victory and placing the only loss of last week’s career in the rear view mirror.

One of the stars of the Tardif working group, the colt earned a two-hole trip behind Mattucci (Heath Campbell/Valerie Grondin) in the $18,184 Maine Breeders Stakes (MSBS) for 2-year-old side-gait colts . Regular driver Kevin Switzer Jr. let the point guard set up opening panels of 29 and 1:00.4 before shooting to the outside stream and battling for the lead.

In 1:31 from three quarters, Luke McGook had gained momentum and was just three games behind leader Matucci, with stablemate Rockaroundsam (Andy Harrington/Marc Tardif) hot on his heels.

Leading the stretch, Luke McGook stuck a nose in front and extended his advance to the wire to win by half a length in 1:59.3, a new lifetime best.

Bred by Ericka Saucier and now owned by Leighton Property, Luke McGook paid $3.00 to win for the sixth time in his seven-start career. Mattucci finished second with Rockaround Sam third. All three have recorded 28 rapids and each the last quarters.

In the previous $18,183 MSBS 2CP no-bet race, Two Towns Over (Aaron Hall/Valerie Grondin) picked up their third win in a row, the previous one notably handing Luke McGook his first and only career loss.

Scoring at the far post, the first-year son of Deuce Seelster went straight to the top and never looked back to win in 1:58.3, a new career high, with a 28.1 last quarter added for good measure. Owned by Valérie Grondin and bred by Andrew Bustard, Two Towns Over is just five points off second place in the Maine Breeders Stakes divisional standings for 2-year-old colts and geldings.

On Sunday (August 29), the Tardif task force was back, sweeping the two-division Maine Breeders Stakes over $17,000 for 2-year-old fillies leaders.

With the two races ahead, the races without bets, the fillies tested the surface for the next pari-mutuel card and found it to be fast and functional. Katelyn’s Angel (Western Maverick) and driver Kevin Switzer Jr./Marc Tardif) were content to let Janie (Mark Athearn/Gretchen Athern) cut the fractions, with the former beating the latter in the closing strides to win in 2:01.2.

Owned by Leighton Property and bred by Lesley Leighton, this was the third win in a row for Katelyn’s Angel. Janie finished second; Ally Mac (Aaron Hall/Mike Graffam) finished third.

Divisional point leader Pickmepickme (Andy Harrington/Marc Tardif) continued her winning road, battling and stomping to a 2:00.3 win in the second-paced MSBS freshman filly at $17,989. Marking from the back post, the daughter of Western Maverick got all the calls as she won hands down for the fifth time in her career. Owned and bred by Marc Tardif, Pickmepickme now has four consecutive wins.

On Thursday (September 1), Windsor welcomes the Maine-bred 3-year-old fillies, with two divisions over $18,000, with the “glamorous boy” colts returning Friday (September 2). Windsor is one of Maine’s oldest and largest agricultural fairs and runs until Labor Day (September 5).

After the Windsor Fair, the Maine Breeders Stakes makes two stops in Bangor on September 11 and 17, then returns to the following fairs: Farmington, September 18-21; Cumberland, September 28 – October 1 (2-year-old finals); and Historic Fryeburg, Oct. 6-8.

Maine’s sophomore finals return to Bangor for all MSBS 3-year-old division finals on October 15. The 2-Year-Old Championships will be held two weeks earlier on Saturday, October 1 at the Cumberland Fair.

by Chris Tully, for the Maine Breeders Stakes