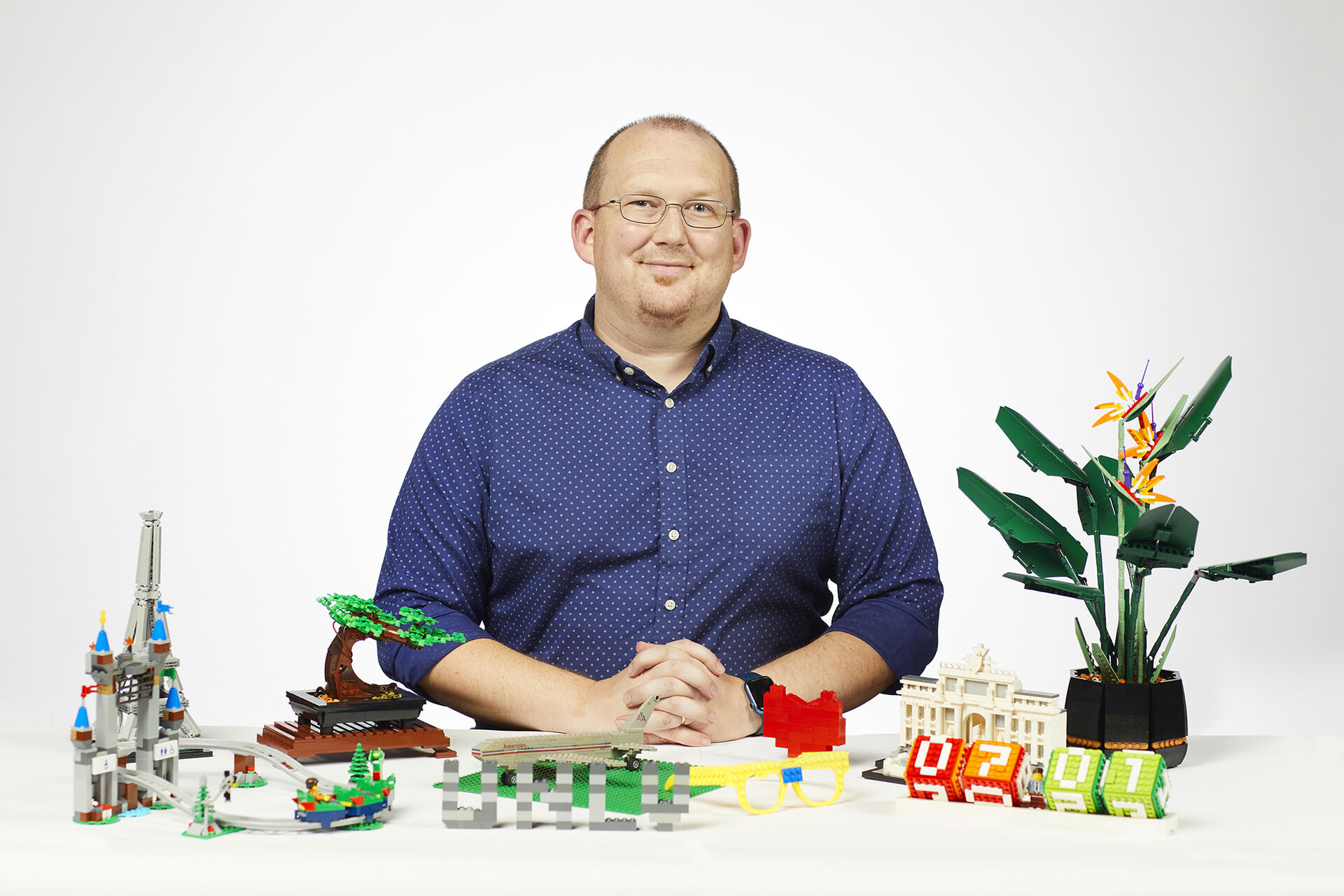 As we go through life, from naïve youth to accomplished adult, it is often advised to – how should we phrase this? – LEGO of our childhood dreams.

For Rian Satterwhite, that meant giving up on becoming a LEGO set designer.

“I was obsessed with LEGOS,” said the director of Service Learning and Leadership. “I was so fascinated by the design process – how many different designs and iterations did a team have to come up with before deciding on this, which was ultimately sold? I thought, ‘This would be cool to constantly tinker with Legos all day and come up with all sorts of options?”

Subtract the Legos, keep tinkering with the options, and you have Satterwhite’s approach to improving his community: how many ways can he improve it?

As it turns out: A lot. But it takes a talent for leadership – both to take it on and to pass it on.

“For me, the oldest question in leadership studies is: leadership for what?” said Satterwhite, winner of the university’s Top Tier Award.

“For a long time, the field of leadership development has been dominated by a business and enterprise perspective that can be boiled down to quarterly returns and shareholder values. But for me, that answer always came back to the community. If you’re rooted where you are and have built relationships, connections and networks – whether you’re in business or in higher education or a beginning student – ​​the answer has to be somewhere in the community.

Distilled to its essence, the department headed by Satterwhite guides students in service to the community.

“He is part of an incredible team of colleagues whose work to engage, retain and graduate UNLV students is enhanced by numerous partnerships on and off campus,” said Kyle Kaalberg, Executive Director of Strategy and strategic initiatives, announcing the price. . “Together, their efforts have helped support efforts to earn UNLV’s Carnegie Optional Classification for Community Engagement.”

Since joining UNLV in 2017, Satterwhite has distinguished himself by championing and directly contributing to initiatives that drive community partnerships – with 42 partners to date, from the largest (Three Square Food Bank, Green Our Planet) to the little ones (Broadway in the Hood). Many of these connections are forged through the Engelstad Scholars program, which places more than 100 UNLV students in long-term volunteer roles in southern Nevada.

“No matter where (students) are placed, they get this long-term intensive inside look and essentially become a long-term employee of these organizations so that they really understand the work of this organization, but also the non-profit sector lucrative in general,” Satterwhite said.

Locking in that understanding early is vital, he added, so it means more than bolstering corporate interests once they are in the world. “Leadership can be this unattainable and distant concept for a lot of people and students in particular,” he said. “The opportunity to see peers make active choices about how they spend their time, how they invest their careers in making a community a better place can really bring the concept to reality, something they can use now, not when they become a middle manager.

Over the past two years, Satterwhite has also helped raise over $500,000 in grants and gifts to help vulnerable student populations. Some program enrollees benefit from both community engagement efforts and those for disadvantaged students.

One is Jenny Stiles, a journalism major due to graduate in December, who is a program assistant for UNLVolunteers, the student-run organization within SLL. “I was a Make A Wish kid. From there I learned how the nonprofit industry works,” said Stiles, who has been studying at UNLV on and off for 13 years, largely due to long breaks to tend to his health, and leads the campus Service Day event each semester.

“I am a disabled person, I have been all my life. I just wanted to be part of college after I graduated from high school in 2005,” Stiles recalled of joining UNLVolunteers. “I cried when I applied because it was the first time that I really felt valued as a worker and not seen as inferior. I am considered an important person, that I can do a job well and be of value. This is not how many people with disabilities feel in their work. This is a department that wants people of diversity and (who) have actually lived lives.

Among his multiple projects that help support underprivileged students at UNLV, Satterwhite was integral in launching the Fostering Scholars Program to support those from foster families – the first of its kind in Nevada. “I had a relatively privileged childhood in Portland, Oregon, so I haven’t had much exposure to it, but it’s more driven by my core values ​​and beliefs, which are about social justice, equity and access,” Satterwhite said of how his parents raised him and his sister – which included her family hosting exchange students from around the world.

“My parents said, ‘We can’t afford to send you out into the world, but we’re going to bring the world to you,'” Satterwhite said, explaining that this mindset fuels much of his endeavors, such as than understanding the effects of host family placement on students – and the cautious attitude it engenders. “The biggest challenge there is building relationships because they’ve been burned so many times. Naturally, they are not easily trusted. It takes a lot of effort to show care, reliability, and follow-through before these relationships blossom.

In the same spirit, the Satterwhite team supports the retention of students struggling with food and housing insecurity through the HOPE Scholars program. Another community program they support is Take What You Need, a series of pop-up pantry events in which donated goods are set up, grocery store-style, so students can grab whatever they need. they need for free.

“One of the invisible populations in our community is often made up of college students,” noted Satterwhite. “It’s assumed that if you’re in college, you have the resources to take care of yourself, or your family,” he said, pointing to a recent student survey that found half of college students UNLV experience a certain degree of basic needs. insecurity – such as the lack of basic toiletries, clothing, kitchen utensils and hygiene products.

Another service-learning-based program is Alternative Break trips, in which each trip is built around a particular social issue with nonprofits serving as hosts and co-facilitators. One trip was to San Diego to look at border and immigration issues. Another was at the Santa Monica Mountains National Recreation Area to observe the suburban and natural landscape and discuss ecosystems and sustainability.

Whatever program students enroll in, it’s what they get out of it that satisfies the most the former aspiring Lego designer who turned “tinkering with options” into a boon for UNLV and Nevada. “I love to see a participant light up after a particular experience and come back and say, ‘How can I stay involved and learn more?’ Satterwhite said. “It’s really cool to see that passion ignited from an experience and to seek out opportunities to help other students be exposed to the experience they’ve had.”

All of Satterwhite’s projects combine to create a simple result: the joy of service – and, coincidentally, the Top Tier Award. “It’s pretty amazing to be recognized in this way,” he said.

“(Soon) this will be the longest stay I have had at a university in my career. It’s rewarding to be in a place where I’ve been able to do so much in five years. This is where I want to put down roots and continue to invest, grow and learn. It is the house.”

2022-08-16
Previous Post: This Golden Retriever is holding various objects to get his human’s attention | Tendency
Next Post: Tiny Dog Shares The Reality Of Having A Golden Retriever Bro In Funny Clip